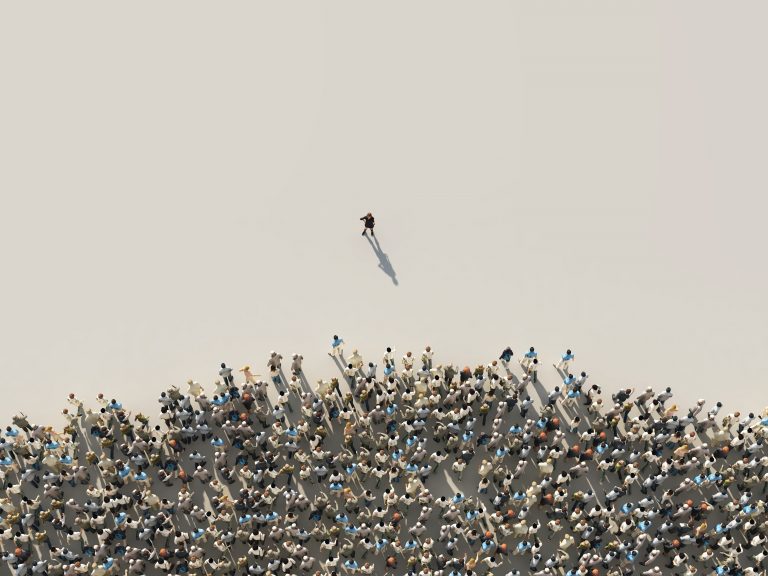 “Wherefore come out from among them, and be ye separate, saith the Lord, and touch not the unclean thing; and I will receive you.” (2 Corinthians 6:17)

What does it mean to be “separate”?

Throughout ancient and modern human history the Jewish people have played a significant role in the world. I believe it’s because, from the very beginning, God called and chose them to be a people of significance, a people that represented Him, His laws and His desires in the world. For this reason, He set them aside and made them different; shall we say, special? Though there may be physical or genetic components to this separateness, I believe the essence and emphasis of the command was based on morality, justice, godliness, holiness; more notably because of their relationship with God, and His expectations of them as a people, and as individuals. He didn’t want His people to be like “other” nations in their time and space. No, He wanted them to represent who He was, His character, His attributes, and His holiness.

In that same way, as quoted above in 2 Corinthians 6:17, the call goes out to Christians across the diaspora to be separate. What exactly does that mean? Christianity does not and should not represent a certain race, ethnicity, genetics, any human traits or lineage. For the Bible says in Galatians 3:28: “There is neither Jew nor Greek, there is neither bond nor free, there is neither male nor female: for ye are all one in Christ Jesus.” And similarly in Colossians 3:11, “Where there is neither Greek nor Jew, circumcision nor uncircumcision, Barbarian, Scythian, bond nor free: but Christ is all, and in all.” Therefore, what it means to be separate is this… to be different from the World and called unto Christ and His holiness.

1 Peter 2:9, says, “But ye are a chosen generation, a royal priesthood, an holy nation, a peculiar people; that ye should shew forth the praises of him who hath called you out of darkness into his marvellous light;”

We gather from these scriptures and many others that the “world” is something that is antithetical to Christianity; therefore, a true Christian believer should separate oneself from the entanglements and enticements of said world.  For the world is associated with darkness, immorality, sin, godlessness, immorality, unbelief, lust, etc.

Won’t that create a negative “Us vs Them situation?

So, if we, as believers in Christ, are to separate ourselves from the world, wouldn’t that necessitate an “us” vs. “them” situation, where we place “us”/ourselves on a pedestal, while “they” are lowly heathen?  Won’t that create a caste system or a upper class/lower class mentality of “haves” and “have-nots?” Sadly, in many ways it does.  Taken at face value, and seeing countless examples of holier-than-thou, self-righteous, prideful Christians it would seem that being “separate” is a bad thing.

That would be the case if not for this scripture:  John 3:16, says, “For God so loved the world, that he gave his only begotten Son, that whosoever believeth in him should not perish, but have everlasting life.”  This means the counterbalance to being separate from the world is God loving the world… so much so, that He died for it.  So how can we reconcile loving not the world (1 John 2:15) with God loving the world (John 3:16)?  It’s obvious from the context of the verses that “world” means something different in each instance – in John 3:16, Jesus so loved the people in the world that he died for them.  We need to love people, while being careful to not love the sinful ways of the world.  I know the term, “hate the sin, love the sinner,” has fallen out of acceptability these days, but there is still a huge truth in there.  Side note: “hate the sin, love the sinner” is deemed unacceptable nowadays for a few reasons :

With the Holy Spirit’s help, we can and must love people, no matter what their spiritual condition or situation – Jesus did it – Jesus preached it (See the parable of the Good Samaritan in Luke 10:25-27) – therefore, we can too! And the church needs to remember, except for the grace of God, there go we. There is no room for condemnation of people (Jesus said they are already condemned, therefore He didn’t come to condemn – see John 3:17), and because people have embraced their sin as almost their identity, we also need to be careful about how we condemn sin nowadays – it’s just the society we live in.  That doesn’t mean we can’t call sin, sin – God forbid. It’s just that we need to wrap everything we say – how we interact with people – and the attitude with which we carry ourselves – in God’s love and amazing grace!  That way people not only hear what we are saying, but they feel it too… they feel the love and compassion of Jesus – who died for this world.

If you are easily offended, you may not like this section.  Separation from the world doesn’t mean we physically separate ourselves from non-Christians. It means living a life that is physically, spiritually, and morally different than that of the average non-Christian. If we leave it there, I think it would do an injustice to anyone reading this, so let’s get down to the nitty gritty.

The world has a way of sucking in everything in its path, and I mean everything! From behavior, to music, to clothing/fashion, to entertainment/social media, to education (every level), to social behaviors, to attitudes, to mindsets, to self-identity, to status, to economics, to EVERYTHING. So?  What does that mean? That means that when it comes to being separate from the world, EVERYTHING should be on the table! It would be easy to just say, therefore, let the Holy Spirit guide you and everything will be alright… but there are Biblical principles that we can’t just leave to chance or hoping the Holy Spirit will do this or that. Either reading, studying, understanding the Bible is important, or it’s not. I believe it’s important… so, let’s proceed.

We don’t fit in this world

God’s people (i.e. the Church, Christians), even in the 21st century should not fit into the mold of this world. We should be different, we should stand out, we should be noticeably different than any non-Christian we rub shoulders with.  Why? Because God has called us “out” of the lifestyles, attitudes, behaviors and even the appearance of a world that is broken, dying and falling apart. Just as the Jews were singled out in World War II by Hitler and the Nazi’s, it should be just as easy to single out Christians in the world today! We should be identifiable, not by our ethnicity or cultural heritage, but by our appearance, actions, and lifestyle.

How can we be different?

Therefore, areas of separation should include things like the music you listen to, the movies and TV shows you watch, the places you go to, the things you consume (alcohol/drugs/etc.), the clothes you wear, the people you “hang” out with, the social media you consume, the ideas you espouse, even the thoughts you think; basically everything. Some “holiness” churches even “name names”, which tends to rankle even the most devout of modern Christian hearts.  Why? Because we have bought into a lot of the ideas of the day, instead of the basic principles of “separation” specified in the Bible. Couple of examples…Drunkenness and Partying. This should be a no brainer to openly preach against because it is in the Bible (see Galatians 5:19-21). Another example would be worldly music. Music that espouses sinful living and lifestyles should be obviously avoided; why fill your head with bad ideas, mixed with emotional, heart pounding music? This should be a no brainer for the Christian in any era of time. Sadly, this type of discussion is missing from most churches because Biblical separation is a non-starter.

Separation of men and women

But there is another area of separation that the Bible has a lot to say about. Men and Women. Super sensitive subject in our post-millennial world, right? What used to be a common understanding of those two terms, is now strongly contested, questioned, and even maligned? Yes. But the differentiation of the sexes (physically) and gender roles (male/female expectations) is established, defined, bolstered, propagated, and necessitated by the Bible (both the Old and New testaments). Scriptures?  Here you go:

This is just a sampling of scripture, there’s a lot more. Regardless, it’s clear that the Bible established a separation between men and women, both in physical appearance (clothing and hair length), and gender roles (in the marriage covenant). This is in direct opposition and an afront to the modern mind and sensibility, however, if we are to be true to God’s Word, we must reject the world’s thinking on this matter. With thoughtful and diligent study of His Word we begin to understand that God said what He said, because He knew multiple thousands of years ago, that these very principles of separation would be challenged, and now vilified.

Why is separation so important?

Separation is important because God said it’s important. He knew that separation was key to upholding the eternal and foundational values, truths, beliefs, standards, principles that God has established since the beginning.  The outright attack against the Bible is real. It’s continual and it will eventually lead to the end of this age. Those who stand for what God stands for, will automatically be different, be separated so to speak. But if you are lulled into appearing, acting like, buying into, participating in, and ultimately bowing down to what the world stands for, you will not make it. You will turn against the very things that God holds to be true and good. Why is separation important?  Because your very soul depends on it.

1 thought on “A Case for Holiness: Be Ye Separate”