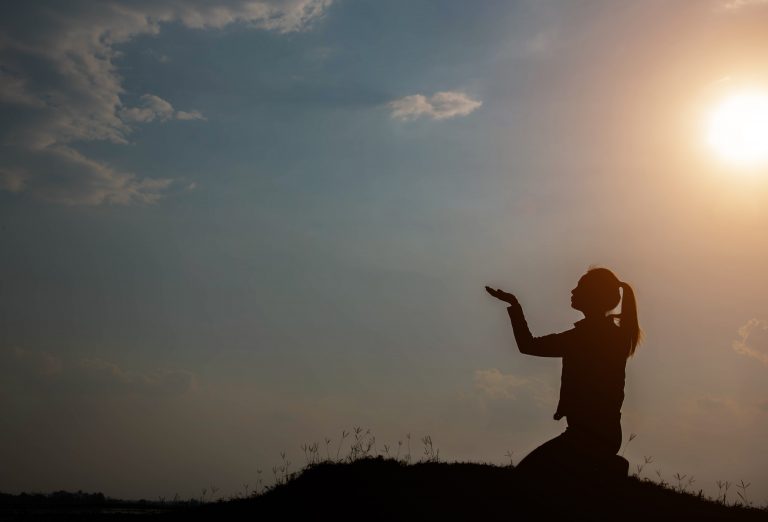 In the Garden of Eden, when Adam and Eve were created, there was perfect fellowship between God and man. Everything was perfect! God always came to visit them during the cool of the day to fellowship, talk and commune with His best friends. Man and woman lived in perfect harmony with creation and with their Creator.  The relationship between God and Adam and Eve was close and personal. Imagine walking and talking with God – nothing between you.

There were really no rules…except one. You cannot, must not eat from the tree of the knowledge of good and evil. For the day that you eat of it, you shall surely die. Now, we know the rest of the story – the serpent spoke, Eve ate, Adam ate, and on that day, Adam and Eve lost innocence. They died spiritually. God could no longer fellowship with man, for man was now stained with the guilt of sin. Instead of there being nothing between them, Adam and Even now had a huge wall that separated them from God – and that wall was called sin.

Through the years, God tried to get close to man. Using substitution, sacrifice, mercy, forgiveness. But man and his sin ever remained between him and God.

Jesus changed everything! Jesus was born, and he lived and died to pay the price for man’s sin.

·      Ephesians 2:13 and 14 say, “But now in Christ Jesus, you who sometimes were far off are made close by the blood of Christ.  For he is our peace… and hath broken down the middle wall of partition between us…”

Not sure if you completely grasp what all of this means, but in case you don’t, Jesus came to remove what separated us from God! We can now approach God freely! When we are born again of the water and of the spirit, when we repent of our sins and are baptized in His name and filled with His Spirit, there is absolutely nothing between us!

With all of that said…if Jesus defeated sin on the cross:

·      Why are people still separated from God?

·      Why do we sometimes live a life that is distant from God?

·      Why is my relationship with God not what is supposed to be at times?

Because there is still something that can separate us from God.

II Kings 5:10-14 says, “And Elisha sent a messenger unto him, saying, “Go and wash in the Jordan seven times, and thy flesh shall come again to thee and thou shalt be clean.” But Naaman was wroth and went away, and said, “Behold, I thought, `He will surely come out to me, and stand and call on the name of the LORD his God, and strike his hand over the place, and cure the leper.’ Are not Abana and Pharpar, rivers of Damascus, better than all the waters of Israel? May I not wash in them and be clean?” So he turned and went away in a rage.  And his servants came near, and spoke unto him and said, “My father, if the prophet had bid thee do some great thing, wouldest thou not have done it? How much rather then, when he saith to thee, `Wash, and be clean’?” Then went he down and dipped himself seven times in the Jordan, according to the saying of the man of God; and his flesh came again like unto the flesh of a little child, and he was clean.”

The thing that separated Naaman from his miracle was his pride. He thought to himself…

All obedience truly is…humility in action. When Naaman laid down his PRIDE, humbled himself and obeyed the voice of God…his miracle came. The wall that separated him between his leprosy and his healing came crumbling down!

Matthew 15:22-28 tells us the story of the woman whose daughter was possessed by a devil. The bible described the situation best:

This woman refused to let pride get in the way of her miracle! When Jesus called her a dog, pride could have risen up in her spirit… but she chose to be humble. She said, “Truth Lord, but even the dogs eat the crumbs that fall from the master’s table.” Her humility mixed with her faith created great faith! Don’t let PRIDE be that wall of partition that keeps you from your God!

James 4:6-8, and 10 says, “But he giveth more grace. Wherefore he saith, God resists the proud, but gives grace unto the humble. Submit yourselves to God. Resist the devil, and he will flee from you… Humble yourselves in the sight of the Lord, and he will lift you up.

Do you need more grace? Is the devil winning some battles lately? Are you battling double-mindedness? It’s time to humble yourself…rip that pride out of your heart. That pride says:

Psalm 51 says, “The sacrifices of God are a broken spirit; a broken and a contrite heart, O God, Thou will not despise…”

The spirit of Laodicea

“And to the angel of the church of the Laodiceans write; These things say the Amen…I know your works, that you are neither cold nor hot: I wish you were cold or hot. So then because you are lukewarm, and neither cold nor hot, I will spue you out of my mouth.”

Because you say, I am rich, and increased with goods, and have need of nothing; and know not that you are wretched, and miserable, and poor, and blind, and naked: I counsel you to buy of me gold tried in the fire, that you may be rich; and white raiment, that you may be clothed, and that the shame of your nakedness do not appear; and anoint your eyes with eye salve, that you may see.

As many as I love, I rebuke and chasten: be zealous therefore, and repent. Behold, I stand at the door, and knock: if any man hear my voice, and open the door, I will come in to him, and will break bread with him, and he with me.”

God despised the church of Laodicea… why? Because they were lukewarm. But what exactly does that mean? A further study into what they did wrong reveals one thing. Self-sufficiency, in need of nothing. Pride.

Jesus paid the price for every sin…that’s not what is separating you from God right now.

What is separating you from God right now is your pride.