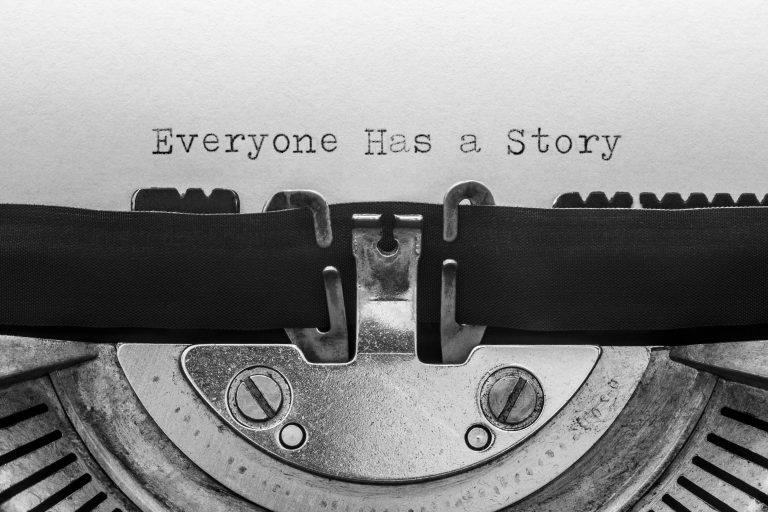 There’s a story we all have of ourselves that we’ve come to believe. Whether it’s a story of hurt, pain, or disappointment, the LORD delights in rewriting our stories, and continually works in and through us to fulfill His good purpose (Philippians 2:13).

What great assurance and confidence we can have, knowing that He caringly weaves the details of our life story to reveal His glory and pleasure.

That’s what happens when our lives are in the hands of God. The Bible is filled with stories of those who had no hope, no future. But when the Lord came along and rewrote their stories, they became “mighty men and women” of God.

We can find a Biblical example of this in Judges Chapters 6 & 7 with the story of Gideon. The nation of Midian had so impoverished the Israelites that they cried out to the Lord for help. And there was Gideon, hiding in the winepress. Yes, hiding! His clan was the weakest in Manasseh, and he was the least in my family. Gideon was a coward and a nobody.

But God was about to rewrite Gideon’s story.

Then the angel of the Lord appeared to Gideon, he said, “The Lord is with you, mighty warrior.” I will be with you, and you will strike down all the Midianites, leaving none alive.” (Judges 6:12,16)

Then the Spirit of the Lord came on Gideon. “Watch me,” he told them. When I and all who are with me blow our trumpets, then from all around the camp blow yours and shout, ‘For the Lord and for Gideon.’” (Judges 7:17-18)

When the three hundred Israelite trumpets sounded, the Lord caused chaos throughout the Midianite camp as thousands of men turned on each other with their swords.

Thus, Midian was subdued before the Israelites and did not raise its head again. During Gideon’s lifetime, the land had peace for forty years and Gideon died at a good old age.

Gideon started off as a coward, and ended his life a mighty and righteous warrior.

The Bible gives us another example with the story of Rahab in Joshua Chapter 2. This woman was reviled as unworthy and shameful because she was a prostitute. She was looked down upon. People made fun of her and called her names. Perhaps some even spit on her. Indeed, she was unworthy. But she had heard stories of the miraculous ways God rescued the Israelites from the hand of the Egyptians (Joshua 2:8-11).

And God was about to rewrite Rahab’s story.

While Rahab was a prostitute and a Canaanite, that did not stop her from fearing the Lord and boldly asking the Israelite spies she had hidden to spare her from the Lord’s judgment. While the king of Jericho was in search of the spies, she made a way of escape by letting them down through her window (Judges 2:15-16).

Although Rahab was unworthy, the Lord made her noteworthy. In time, Rahab became one of the very few women listed in Jesus’s genealogy (Matthew 1:5). More importantly, the story of Rahab reveals God’s desire since time passed: He wants all people to be saved and to come to a knowledge of the truth (1 Timothy 2:4).

Rahab started off as a prostitute, yet found herself in the same bloodline as Jesus because of her faith.

I was a “mistake” from the time of my conception, even before I was born. I was raised in extreme poverty and looked down upon throughout my childhood. Fear, shame, rejection: those are the feelings I lived with each day. As I entered my teen years and moved into early adulthood, alcohol and drugs helped ease my emotional pain. And with passing time, a life of homosexuality helped me to escape the feelings of rejection and loneliness I experienced in my life. In the eyes of the world and in the eyes of the Church, I was at the bottom of the pit of hopelessness.

But God was about to rewrite my story.

After many years of loneliness and despair, God answered my prayers and opened a door with an opportunity for my healing. He gave me a mindset with a crystal-clear goal: I must choose to follow Jesus.

For me, it was “out of the darkness and into His marvelous light”. Jesus said, “The people who sat in darkness have seen a great light. And for those who lived in the land where death casts its shadow, a light has shined.” (Matthew 4:16)

As I left behind my life of homosexuality, there were other strongholds that came against me. Pornography became my daily “fix” to cope with all my underlying, unmet emotional needs. In my isolation and secrecy, fear and shame became my “prison.”  I was still living in darkness.

“Darkness cannot be seen, cannot be felt, cannot be heard, cannot be smelt; it lies behind stars and under hills, and empty holes it fills. It comes first and follows after; ends life, kills laughter.” ― J.R.R. Tolkien

As I walked into my first “Free Indeed” group meeting at International Pentecostal Church, I was met with “light”, with the term “light” meaning vulnerability, transparency, and confession.  “Light” as in a group of like-minded Brothers who were there to support me and love me: not to judge nor condemn me.

“Because of God’s tender mercy, the morning light from heaven is about to break upon us, to give light to those who sit in darkness and in the shadow of death, and to guide us to the path of peace.” (Luke 1:78-79)

And this has made all the difference. Where there is “light,” the darkness is destroyed. Where there is confession and honesty, “light” wins out!  Fear and shame are not able to survive in the “light”.

Today, by the Grace of God, I can say that I’m porn-FREE!  Those are words I never dreamed possible for me to speak in my life.

Now don’t get me wrong: I have not yet arrived. Not even close. Daily I must battle the lust of my flesh, the lust of my eyes, and the pride of my life. There are times when I still face same-sex temptations. So what must I do?

I must do exactly the same thing that every person who chooses to serve Jesus must do. I choose to “deny self, take up my cross, and follow Jesus.” (Matthew 16:24–26)

Is this an easy journey? Is choosing to serve Jesus a bed of roses or an easy cakewalk? On the contrary, it’s a battle, it’s a real blood-and-gut battle for my soul, for eternity.

“But whatever were gains to me I now consider loss for the sake of Christ. What is more, I consider everything a loss because of the surpassing worth of knowing Christ Jesus my Lord, for whose sake I have lost all things. I consider them garbage, that I may gain Christ and be found in him, not having a righteousness of my own that comes from the law, but that which is through faith in Christ; the righteousness that comes from God on the basis of faith. I want to know Christ; yes, to know the power of his resurrection and participation in his sufferings, becoming like him in his death, and so, somehow, attaining to the resurrection from the dead. Not that I have already obtained all this, or have already arrived at my goal, but I press on to take hold of that for which Christ Jesus took hold of me. Brothers and sisters, I do not consider myself yet to have taken hold of it. But one thing I do: Forgetting what is behind and straining toward what is ahead, I press on toward the goal to win the prize for which God has called me heavenward in Christ Jesus.” Philippians 3:7-14

Nello started off thinking he was a mistake, but now he’s a new creation living under God’s grace!

So remember this, God isn’t finished with your story!

He is the Author of Life (Hebrews 12:2). Just as He rewrote the stories of Gideon, Rahab, and Nello, He is also writing yours! That should fill you with immense hope and confidence, knowing He will create a masterpiece out of your very own story.