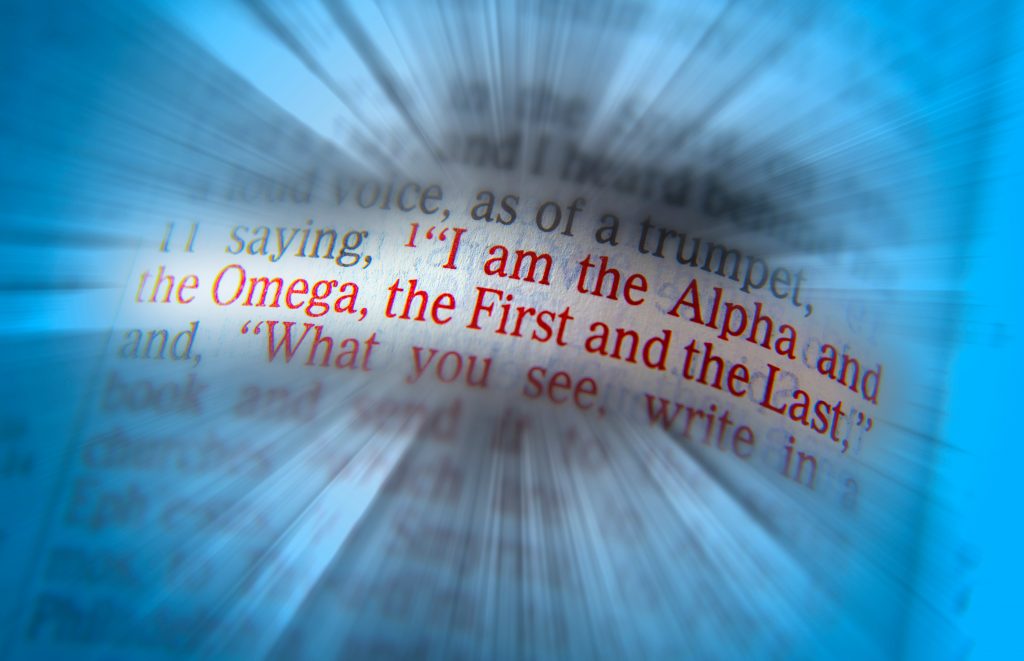 In Revelation 22:12, it says, “And, behold, I come quickly; and my reward is with me, to give every man according as his work shall be. I am Alpha and Omega, the beginning and the end, the first and the last.”

Who Gets the Last Word?

And maybe the world would be a better place if we just didn’t have to have the last word.  I have just solved all the world’s problems, you’re welcome!

You’ve heard of the Alpha male or the Alpha dog… it’s the leader of pack – the head honcho – the macho male – the one who’s not afraid of anything – who will take on all comers.  Well God is the alpha and omega, the beginning and ending, the first and last!  That means Jesus is the Alpha God! He’s the first and should be first and foremost in our life.  The head honcho in our lives – the King of our throne!

But what is alpha and omega?  Alpha and Omega are first and last letters of the Greek Alphabet.  Most people attribute this attribute of God to his eternality.  He is timeless… He was there before everything, and He will be here after everything is finished.  And because God is our Alpha it’s important that He is first!

The 63rd Psalm, verses 1-5, says, Oh God, You are my God; early will I seek You: my soul thirsts for You, my flesh longs for You in a dry and thirsty land, where no water is; To see Your power and Your glory, so as I have seen You in the sanctuary. Because Your lovingkindness is better than life, my lips shall praise You.  I will bless You while I live: I will lift up my hands in Your name. My soul shall be satisfied as with marrow and fatness; and my mouth shall praise You with joyful lips:

And even though we believe that this context means that David woke up early in the morning, it is also true in two other ways:

Why did God pick David to be King over all Israel?  Maybe it’s because David at such a young age, put God first.  God was David’s Alpha! David’s early life tending sheep, writing Psalms, killing lions and bears in the name of the Lord!   That’s true in living for God today. It’s important that we remember our creator early in life, to develop patterns and habits that are true to God – that truly put Him first in our lives.

·       When we give God our lives early on, we have a head start in our journey of life – we have more knowledge, understanding, wisdom, etc.

2)  David sought God early in his situations – he relied on God and trusted in God!

Because God was David’s Alpha – He was David’s first weapon, his first plan, his first option.  You can read it through David’s life, and in His psalms.  Especially early on, David sought God early in situations, and often.  “You come to me with a sword and shield, but I come to you in the name of the Lord!” – David cried out as he faced the giant.  Even though David was persecuted and went through many trials and tribulations along life’s journey, one thing was a constant!

David put God first in everything!  He praised his way out of trouble… He prayed His way out of situations…  He had faith and trust in God early!!!  And that’s why David was a man after God’s own heart!  God is our alpha… and David treated Him that way!  The same is true with us in our walk with God!  Too often we wait to bring God into our situation!  Too often, we use God as our last resort.

We say, let me handle this God, then when life get’s overwhelming, we let God take care of business.  All along our journey in life, God is saying, “Let me be your ALPHA!”  I want to be first in your life!!!  He’s watching from the sidelines as you do your own thing – do it YOUR WAY…  FUMBLING, FALLING, STRUGGLING…. God’s saying, put me in the game…  Put me in your life… but let me be a starter, don’t bring me in when your down and losing out.  Bring me in early and often!  Let me be your salvation, your healing, your deliverance early!  For I am your Alpha!

Let me paint the picture…

Joshua led the battle of Jericho – for seven days the children of Israel marched around the walls of Jericho, on the seventh day, they marched around seven times and the walls came a tumblin’ down…. But this verses shows us some insight into how they formed the line. Armed men went before the priests that blew the trumpets, then came the Ark of the Covenant, and the armed men followed after. Those armed men were called the “rereward”…Other translations call it the “rear guard”.  In other words, God had them set up so that the priests and the Ark would always be protected.

Isaiah 52:12, says, For ye shall not go out with haste, nor go by flight: for the Lord will go before you; and the God of Israel will be your reward.

This is illustrated unbelievably in Exodus 14.

The Pillar of Cloud and the Pillar of fire were what led Israel to the promise land, but when there was trouble behind them… that same Pillar of cloud and fire moved to rear. Because not only will God fight your battles ahead of you, but He will fight behind you!  When Moses said, stand still and see the salvation of the Lord…  the Children looked in front of them and saw the Red Sea open up, but we often forget what was going on behind.

Hebrews chapter 12, verse 2, says, Looking unto Jesus the author and finisher of our faith; who for the joy that was set before him endured the cross, despising the shame, and is set down at the right hand of the throne of God.

Jesus finishes well, because He knows what’s important.  He came to this world to save it, and now at the very end, He wasn’t going to give up now.  The same is true for us…  He’s the author and finisher of OUR faith!  That means He helped us start this journey, and He sure ain’t gonna give up on us now.  Because He’s not just our Alpha!  He’s our Omega too!

In Ephesians 6, the Bible speaks about putting on the whole armor of God:  Loins girt with Truth, Breastplate of Righteousness, Feet covered with the Gospel, Shield of Faith, Helmet of Salvation, Sword of the Spirit.

Notice there is nothing to protect the backside of the Christian, and I have heard it preached that it means we should never run, never retreat, always face the enemy!  And that sounds great, right!  But I believe there’s another reason…  God’s got our back!  Yes, He’s in front of us, leading and guiding us, but when it comes to our protection.  He’s there!  He’s your rereward – the Angel of the Lord encamps round about them that fear Him!

Let Your Alpha Be Your Omega

Why is this so important?

Sometimes we blow it… we should have brought God in early.

·       We should have leaned on our brothers and sisters…

And now we find ourselves in the belly of the whale.  In a deep dark hole, with no escape…. We blame ourselves, for if only we would have sought God early!  Like the Bible says!  If only we weren’t so proud, so arrogant, as to think “I got this God.”  But now you have hit rock bottom…. What are you going to do?  Remember your OMEGA…. Jesus is the first and the LAST!  He’s the beginning and the ENDING!!!  It’s not over until God says it’s over!  What does that mean?  GOD HAS THE LAST WORD IN YOUR LIFE!

Why, because God specializes in finishing well, and He’s got your back.